Former BBNaija housemate Angel Smith has said that her big backside, which she claims prevents guys from rejecting her, gives her power.

The reality television actress said that she couldn’t understand being told “no” because of her big behind on her official Twitter account, where she made the controversial statement.

Here was what she wrote: ⬇️ 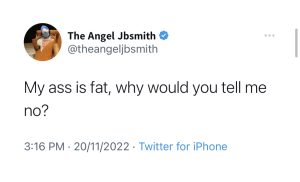 some fans and followers agreed , some disagreed.

Tell us what you think in the comment section below ⬇️